When we  {Barbie & I} recently catered a baby shower for my good friend, Jessyca's daughter, one of the most fun but also most challenging things we faced was coming up with the right selection of tea sandwiches.... we wanted them to look cute & refined, eclectic & yummy, be a good assortment of savory & sweet....  and of course EASY for us to put together.

I think we were successful.

We made about 40 of each type {1 per guest of each} and it took two of us a good couple/few hours not counting some of the breads we baked ourselves, so if you are taking this on yourself get a good start on your day.


In each recipe I've told you my thoughts on make ahead components and all the sandwiches can hold up for several hours at a comfortable room temperature. Each recipe will make approximately 40 sandwiches.


Here are the recipes: 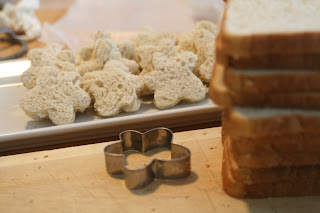 ORANGE CREME
YOU'LL NEED
1 (11 oz) can Mandarin Oranges
1 (8 oz) package of cream cheese
1/2 cup finely chopped walnuts
1/2 tsp cinnamon
20 pieces oat bread
MAKE AHEAD:  Cream all ingredients together {except the bread LOL} and cover tightly for use within the next day or two.
ASSEMBLY:  Spread a layer of the creme on one slice of bread, cover with another making a sandwich {don't go to the crust when spreading} then using a cookie cutter, {we used a flower} "cut" 4 tea sandwiches from each "sandwich" leaving the crust behind to feed to the birds :) 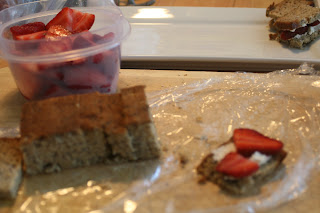 STRAWBERRIES & CREAM
YOU'LL NEED
1 pint strawberries, washed and hulled
1 (8 oz) tub of WHIPPED cream cheese
1 loaf banana bread
MAKE AHEAD:  You can make your banana bread in advance if you aren't using store bought.  I don't recommend cutting the berries until ready to use but you could wash & hull them the night before.
ASSEMBLY:  slice your banana bread {don't remove the crust}; depending on the height of the loaf you should hope to get 4 pieces from each {that is quarter them}.  Set aside.  Slice your berries length wise in 1/2 inch width.  Then spread a layer of the cream cheese on one slice of bread, place two or three berries; spread a layer of the cream cheese on the OTHER slice of bread as well and put together making a sandwich. 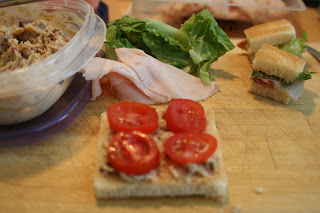 YOU'LL NEED:
1/3 cup mayonnaise
1/3 finely chopped cooked bacon
20 pieces toasted white bread
1/4 lb. deli-sliced turkey
1 pint cherry tomatoes
1 cup baby greens
MAKE AHEAD:  Definitely make your bacon mayo in advance {at least a couple hours} so it can "marry."  This is ridiculously YUMMY by the way.  You could also slice your tomatoes in advance if you wanted and store in an airtight container.
ASSEMBLY:  Toast your white bread and cut off the crust; set aside. Spread a layer of the bacon mayo on one slice of bread, place 4 tomato slice as shown above {you are making 4 sandwiches at a time}; put a piece of turkey and some lettuce then place the other slice of bread on top making a sandwich; cut into quarters {4 tea sandwiches}. 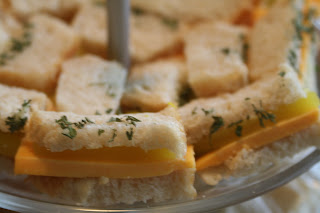 PICKLES & CHEDDAR ON SOURDOUGH*
*this sounds weird but people LOVE
YOU'LL NEED:
1 jar dill pickles, I cheated and used the "sandwich sliced" kind
1 brick of cheddar {I used sharp orange}
1 loaf of sourdough bread
1 TBSP dried parsley or chopped fresh if you have.
MAKE AHEAD:  I strongly recommend "draining" your pickles overnight, I lined a colander with the slices and covered with Saran and put over a plate overnight in the fridge.  They will drain A LOT.  We made our own bread from a store bought frozen loaf and it was perfect, you want a pretty "dense" bread.  You will get approximately 3 sandwiches from every 2 slices.  You can also slice your cheese and store in a baggie.
ASSEMBLY:  Line three pickle slices across a slice of bread, top with three pieces of cheese, then the other slice of bread, making a sandwich; cut into three tea sandwiches. Put your parsley on a flat plate and dip one long edge in it.  VOILA! 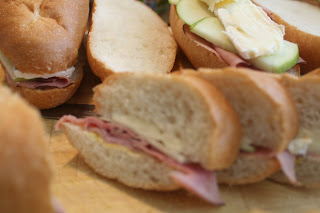 1 Baguette or 3 "hoagie rolls"
1/2 lb thin sliced honey baked ham
1-2 Granny Smith Apples {I really recommend avoiding Red apples because they will brown faster}
MAKE AHEAD:  Other than slicing your brie {leave the rind on}, this is a day of sandwich.... in fact make it LAST.
ASSEMBLY:  sliced your roll in half, line with ham then apple then brie put the top on and slice into 2 inch sandwiches.


And there you have it.... an AWESOME assortment of pretty AND tasty tea sandwiches for any girly occasion!

Posted by Heidi {Young Grasshopper} at 10:32 AM

My Reader's All Time Favs!